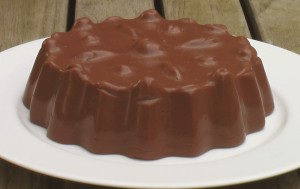 This chocolate pudding recipe gives a very thick pudding which will keep its form when turned out of the mould. If you like a more liquid pudding use 60 g corn starch instead of 100 g.

Add the corn starch to about 200 ml soy milk and mix to get a smooth slurry.

Everybody likes chocolate because of its melt-in-the-mouth consistency. Some people even crave chocolate as it contains some chemicals, such as anandamide and phenylethylamine, which creates a soothing effect on the brain. Eating chocolate releases endorphins, which act as pain reliever, in our brain. Chocolate does not cause acne. Dark chocolate is more healthier than milk chocolate.
These are some levels of nutrients in 100 g dark chocolate: 5.3 g protein, 397 mg potassium, 63 mg calcium and 3.2 mg iron. Chocolate also contains some vitamins and large amounts of antioxidant polyphenols, which can help to prevent oxidative damage to our cells and reduces the risk of heart disease and cancer.

Please give us the nutrition facts as to how much protein, fat and total calories are in there per serving.
Joel Daniel - 25/07/2016
Soy recipes