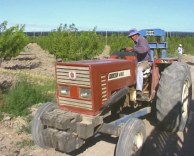 Biodiesel consists of mono alkyl esters produced from vegetable oils,animal or old cooking fats. Soy biodiesel is fuel alternative produced from soybean oil. Biodiesel contains no petroleum diesel, but it can be blended with petroleum diesel.
Since the oil embargo of 1973 by the OPEC a lot of research was done on biodiesel in various universities and government agencies in the USA. Soy biodiesel can be used in diesel engines with little or no modifications. Soy biodiesel is made through a chemical process called transesterification whereby the glycerin is separated from the soybean oil. The process gives two products: methyl esters (the chemical name for biodiesel) and glycerin (used to make soap). Biodiesel is mainly produced and used in the USA. In 1999 about 0.5 million gallons was produced and this value increased to about 25 million gallons in 2003.

As compared to normal diesel, soy biodiesel has following advantages:

The production of biodiesel demand new land or lands previously dedicated to food crops or forests. This may result in deforestation and shortage of foods. Only when marginal lands or agricultural residues are used the environmental advantages of biodiesel are maximal.

I own a 2011 Silverado 2500HD diesel. I have read that soy biodiesel is the best lubercation for diesel engines.
I live in El Paso Tx and would like to know where I can buy soy biodiesel?

How do you involve african continent (ZAMBIA) in soya beans produce since we have favourable rains parterns to produce the commodety and we are lacking good market as farmers. As small scale farmer we are hard working in agricultural produce.
SHABENI NYAMBI - 21/09/2016

we want to produce Soya Biodiesel in india, we have lot of soyabean quantity. but we dont have any practical idea about that, so please can or where get practical us??
rahul swami - 24/02/2017

Hello would like to produce soybean biofuels as am from a tropical island and have land mass to grow soybean.
john girua - 04/09/2017

May I ask the difference of algae and soya in terms of biodiesel. Answering my question will help us a lot for our research. Thank you very much :)
Researcher000 - 25/07/2018
Non-food soy